The world of professional wrestling is in mourning following the death of the legendary Rowdy Roddy Piper last month. Piper suffered a cardiac arrest whilst at his home in Hollywood, California. He was just 61 years old. 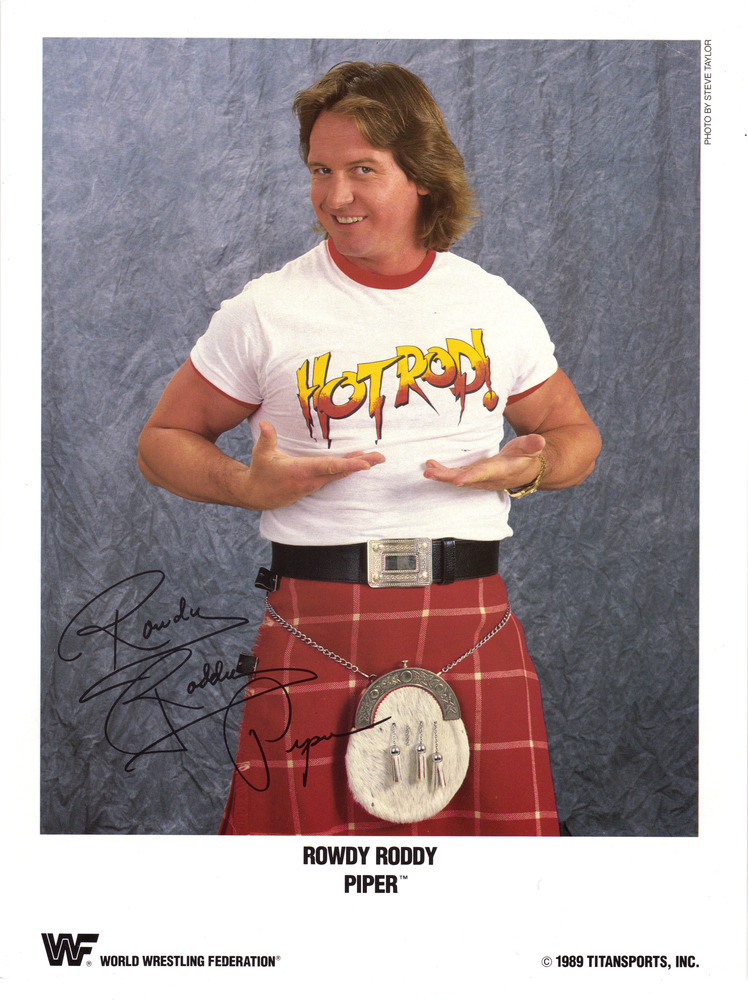 For many kids (including myself) that first became fans in the mid-late 1980âs, Roddy Piper was the definitive wrestling heel (industry jargon for a bad guy). Whether hosting his notorious Piperâs Pit segment, or facing off against Hulk Hogan & Mr. T (with partner Mr. Wonderful Paul Orndorf) at the inaugural WrestleMania event, Piper was one of the industryâs biggest starts during one of its most popular and lucrative periods.

He was also instrumental in making the WWF (now WWE) brand the biggest in professional wrestling. In addition to headlining the very first WrestleMania event (a pioneering Pay-Per View extravaganza that could easily have ruined the company had it proved to be a failure), Piper also featured in one of WrestleMania IIâs three main event matchups, thus securing his position as one of wrestlingâs most bankable stars.

His undercard matches at WrestleManias III, VI and (the stone cold classic against Bret The Hitman Hart at) VIII are absolute highlights of a classic era of pro wrestling. He even acted as a guest referee for the main event of Bret Hart vs. Yokozuna at WrestleMania X. Younger fans, however, will undoubtedly remember Piper teaming with fellow veterans Ricky Steamboat and Jimmy Superfly Snuka to face Chris Jericho at WrestleMania XXV.

In an era defined by outlandish babyface characters with bodybuilder physiques and sometimes questionable in-ring abilities, Roddy Piper stood out as a genuine wrestlerâs wrestler, an authentic tough guy – and the necessarily evil counterpoint to the simplistic, superheroic good guys being featured at the time by the WWF.

Born in Saskatoon, Saskatchewan, Canada in 1954, Roderick Toombs was always an unruly personality. Expelled from school at a young age and subsequently falling out with his father, (a member of the Royal Canadian Mounted Police) Toombs hit the road, staying in various youth hostels and earning a buck wherever he could. Eventually, the tempestuous youth wound up in a wrestling ring, making his in-ring debut at the tender age of just 15-years-old.

The kid was tough (he had a Black Belt in Judo), displayed a natural affinity for the ring and he had a roguish charisma all of his own. In addition, he really could play the bagpipes. After early stints jobbing in Verne Gagneâs AWA, NWA Houston and Fritz Von Erichâs Big Time Wrestling promotion in Dallas, Texas, Piper debuted for Mike and Gene LeBellâs NWA Hollywood promotion and soon became the outfitâs top heel. A slew of regional Championships followed.

Whilst working for promoter Roy Shire in the NWAâs San Francisco territory, Piper developed his character and ring work. In Los Angeles, he feuded with Chavo Guerrero Sr, Hector Guerrero and ultimately locked up against their father, Mexican wrestling legend Gory Guerrero (father of future WWE Champ Eddie). In The Pacific Northwest, he unseated former NWA Worldâs Heavyweight Champion Jack Brisco for Mid Atlanticâs version of the World Heavyweight Championship, a title he would go on to hold twice more.

In the mid 1980âs, Piper entered Vince McMahonâs insurgent WWF. He was billed as being from Glasgow, Scotland and was well known for being the only wrestler to wear a kilt to the ring. Fans ate it up. Feuding with such stars as Hulk Hogan, Adrian Adonis, Andre The Giant, Jimmy Superfly Snuka, Million Dollar Man Ted DiBiase, Jerry The King Lawler and Bret Hitman Hart, to name but a few, Piper always brought out the best in his opponents and it was with the WWF that he became a household name, as well as one of the industryâs biggest ever stars.

In the mid-1990âs, Piper wrestled for WCW (World Championship Wrestling), where he debuted as one of the companyâs headline stars. He feuded, once again, with Hulk Hogan and also battled old rivals such as Ric Flair, Bret Hart and âMacho Manâ Randy Savage. Whilst working for WCW, he was even chosen to headline âStarrcadeâ, the companyâs flagship Pay-Per-View event.

In his later career, Piper made sporadic reappearances for the WWE, briefly worked for TNA, enjoyed a reasonably successful acting career and also hosted his own podcast. He battled Hodgkinâs Lymphoma after being diagnosed with the illness in 2006, but had completely beaten it into remission as of last year. Despite the setbacks caused by his ill health, Piper wrestled his last match in 2011.

Although he never held a recognised World Heavyweight Championship, Piper will be remembered as one of the greatest WWF Intercontinental Champions of all time, a reign that was attested to during his appearance at this yearâs WrestleMania XXXI, where he congratulated then-IC Champion Daniel Bryan on his victory. He also held other notable belts, such as the United States Championship, the WWF/E Tag Team Championship (with Ric Flair) and the NWA World Light Heavyweight Championship.

On the August 3rd edition of RAW, the entire WWE roster, each member clad in Roddyâs signature Hot Rod t-shirts opened the show with a very moving ten bell salute in tribute to the fallen legend.

WWE boss Vince McMahon said, “Roddy Piper was one of the most entertaining, controversial and bombastic performers ever in WWE, beloved by millions of fans around the world. I extend my deepest condolences to his family.”

UFC Bantamweight Champion Rowdy Ronda Rousey dedicated her 34-second victory over Bethe Correia to Piperâs memory, “I just want to say that we lost a really close friend, Rowdy Roddy Piper, who gave me permission to use his name as a fighter (…) And so I hope him and my dad had a good time watching this today.”

Former WWE and WCW Champion (and Piperâs frequent in-ring rival) Bret Hart wrote, âI canât find the words to describe the sorrow in my heart upon learning the news of my dear friend, Roddy Piper, passing away. He was my closest friend in the business, a man that schooled me and guided me throughout my career. In fact, if it wasnât for Roddy Piper reaching out to help me, Iâm sure I wouldâve been a mere footnote in wrestling. He was always there for me. He was family to me.â Hart also recalled that, following his stroke in 2002; Piper was the only wrestler who visited him in hospital.

Hulk Hogan, another of Piperâs famous adversaries, said of Piper that, âHe was my best friend. He is a legend. Godâs gain is our loss. May his family in this time of need, find peace”

Other friends, colleagues and admirers of Piperâs included former WWF Champ The Iron Sheik, who said âRoddy Piper. I love you forever. God bless you Bubbaâ and multi-time World Champion Chris Jericho Tweeted, âSorry to hear of the passing of my friend and Wrestlemania rival #RoddyPiper. One of the greatest who ever lived, but more importantly a legit sweet family man with a good heartâ. Former WWE Divas Champion Paige called Piper a âlegendâ and Tweeted a picture of a broken heart, an image which reflected the feelings of many a wrestler and wrestling fan.

Roddyâs son, Colt, said that his father was his âbest friendâ and a âgreat manâ saying that he would miss him forever and âalways try to be the man he raised me to beâ.

Rowdy Roddy Piper lived a life littered with accomplishments. Not many of us will ever be declared as legendary by our peers and fewer still will be able to stack 30+ Championship reigns anywhere on our resume, but those werenât the manâs proudest achievements. Piper had been married to his wife, Kitty, since 1982 and is survived by her and the four children they lovingly raised together. My thoughts are with them, as well as everyone else who knew, worked with, or simply enjoyed to watch the late, great man work his magic in front of a capacity crowd. R.I.P Roddy.